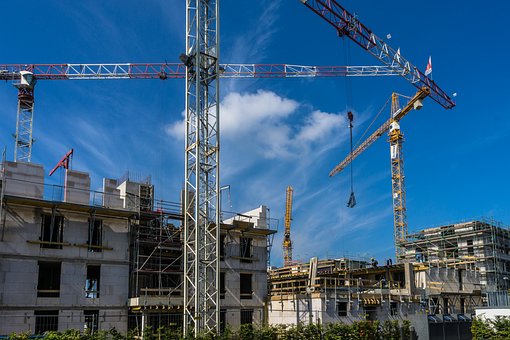 [Home] sales declines invariably lead the way into housing busts. This one … should arrive faster and more forcefully than the experts expect.

Sales of luxury homes in some areas have dropped significantly. As examples, in Nassau County, NY, Oakland, CA, Dallas, TX, Austin, TX and West Palm Beach, FL, annual drops in the rate of upper-end home sales for the three months ended April 30 stretched from 32.8% to 45.3%.

As June numbers roll in, more signs of a real estate slowdown are evident. For instance, the number of active U.S. home listings jumped 18.7% in June from a year earlier, the largest annual increase since the data started in 2017.

The housing bubble is by no means confined to the U.S. Bloomberg reports that New Zealand, Australia and Canada look even more “frothy” than the U.S.

And, then there’s China. Here’s a chart and commentary from the June Global Market Perspective: 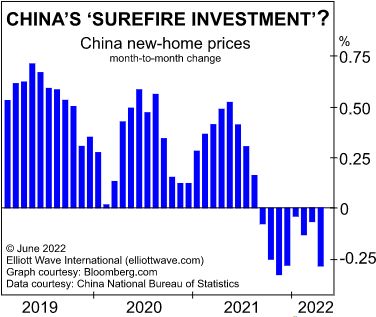 Month-to-month prices of China’s new-home sales turned negative in September, and they’ve continued to fall since. The year-over-year average of new home prices also fell in April. It was the first such decline since November 2015.

In Elliott Wave International’s view, housing markets around the globe are on shaky ground and those who bought at the peak of this latest housing boom better be prepared.

It was mentioned at the top of this article that housing markets within a nation tend to trend with that nation’s stock market.

Elliott wave analysis can help you get a perspective on stock markets anywhere in the world.

Here’s a quote from that book:

In the 1930s, Ralph Nelson Elliott discovered that stock market prices trend and reverse in recognizable patterns. The patterns he discerned are repetitive in form but not necessarily in time or amplitude. Elliott isolated five such patterns, or “waves,” that recur in market price data. He named, defined and illustrated these patterns and their variations. He then described how they link together to form larger versions of themselves, how they in turn link to form the same patterns of the next larger size, and so on, producing a structured progression. He called this phenomenon The Wave Principle.

If you’d like to read the entire book, do know that you can access the online version for free once you join Club EWI, the world’s largest Elliott wave educational community.

Club EWI is free to join, and members enjoy complimentary access to videos and other resources on how the Wave Principle can help them navigate financial markets.

Just follow this link to get started: Elliott Wave Principle: Key to Market Behavior — get instant and free access now.

This article was syndicated by Elliott Wave International and was originally published under the headline What a Major Indicator of “Housing Busts” is Showing Now. EWI is the world’s largest market forecasting firm. Its staff of full-time analysts led by Chartered Market Technician Robert Prechter provides 24-hour-a-day market analysis to institutional and private investors around the world.